I’d Rather Have Cancer Than Diabetes

File Under:  Someone Actually Said That to Me

Welcome to my first installment of “Someone Actually Said That to Me.”  I’m sure as a person with diabetes, no matter what type, you’ve heard some bone-head comments.  Please take a moment to share what someone said to you in the comment section.

I was diagnosed with diabetes at a low-income clinic that primarily served the Mexican community in the early 1990’s.  I was an innocent youngster in my early 20’s.  The nurse practitioner told me he suspected diabetes.  I laughed it off.  No way.  I was too young.

The lab test confirmed the diagnosis and I remember my cheeks  and chin started to tingle as it sank in.  He told me to go down the hall to see the nurse and she would give me a “diabetes sheet.”

There were no cell phones back then and I felt very alone and disconnected walking down the hall in zombie mode while the enormity of it all sank in.  I entered the nurse’s small room and sat down at her desk.  She had her back to me and was going through papers.  It has been over 20 years and I still remember waiting and pulling at the threads on my pink sweater.  I didn’t know what to expect.  Was I going to die?  Would I have to poke myself?  Did I have to sign up to some sort of diabetes national register?

She turned around holding the sheet in her fingers like it was a dirty tissue.  She looked deep into my eyes and with deep anguish said, “I’m so sorry mejita.  I would rather have cancer than diabetes.”

It was like a bat was swung into my stomach.  I now wonder how many people got the news that way.  Having had diabetes for over 20 years, I can now say if I had to have a disease, I’m glad to have one that my actions can influence powerfully.

I’m sure many of you can relate.  Did you hear something stupid too when you were diagnosed?  This instance is my #1 most bonehead moment.  Hopefully it will remain the most stupidest thing I have heard.

Are YOU the Cause of Type 2 Diabetes?

Are type 2 diabetics out-of-control, chip-eating couch potatoes?  Or does diabetes develop first and then cause symptoms such as cravings, fatigue, and weight gain?

You can read articles galore, but I’ve lived it.  Here is my story and interpretation of the cause of type 2 diabetes.

During my school years I was teased and called “skinny chicken.”  I can’t say my appetite was bigger than normal or that I had unhealthy habits aside from chasing boys who played the drums or wore black leather jackets . Being from a poor family meant my sisters and I rarely ate fast food.  I did, however, have a really strong family history of type 2 diabetes.

How strong?  Lets just say there should be diabetes product displays at my family reunions.  Diabetes appeared in at least one set of great-grandparents, both sets of grandparents, my mom, my dad, and a multitude of cousins.  I would have been shocked if I DIDN’T get it.  I would have thought something was seriously wrong with me!

In fact, I was recently sitting around a campfire with many extended family members and we realized all of us (including my very thin police officer cousin) had diabetes.  We told scary campfire stories about being diagnosed and what meds we were taking.  We had enough metformin there to treat everyone in north and south America.

In my early 20’s I started to have issues with chronic urticaria or hives and had to take long courses of prednisone.  While on this medication I gained a LOT of weight and I started to have blood sugar issues.  In the DiabeticMommy forum conversations, many of us with type 2 have taken long courses of prednisone and noted issues beginning around that time.

I think I already had a genetic disposition and the prednisone helped flip my biological switches.

Unbeknownst to me, I was developing a resistance to my own insulin.  Insulin helps get sugar out of the body but mine was not functioning.  Insulin was building up in my system.  Not only does insulin clear out sugar, it also signals for carb cravings, fat storage, and prevents fat from being burned.  My body was becoming a fat-making machine.

My cravings for carbs became unreal.  It felt like somebody gave me a drug.  In a sense, I was being drugged by my own excess insulin.  It got so bad, I would go to three different fast food drive-throughs and get three large hamburger meals for dinner.  And I was STILL hungry!   I ate constantly.  This was very unusual for me.  I gained so much weight, I went from 130 to 280 pounds within months.  I was diagnosed with type 2 diabetes around this time.

I tried losing weight and failed.  I couldn’t understand it.  However, when I learned about what insulin was doing in my body and the specific challenges it presented, I was finally able to lose 100 pounds.  I learned how to stop these out-of-control cravings.

So from my own experience, I would say something happened in my body that caused insulin resistance and weight gain.  Once I understood this concept, my quality of life improved.  Regardless of whether obesity caused diabetes or diabetes caused the obesity, somewhere along the way I ended up in a situation where my body was working against me.

I Have Type 2 Diabetes and I am NOT Ashamed

Instead, active type 2 blogs are as rare as cheap diabetes testing strips.

The original DiabeticMommy forum has over 9000 registered members.  However, the majority of the socially active members are type 1 members.  Where are the type 2′s?  For some reason I envision images of type 2 members standing silent and lurking in the shadows behind a door like Boo Radley.

Do type 2 diabetics have an aversion to typing?  Do we have it so together we don’t need any help but like to lurk?  Do we disintegrate the moment our virtual thoughts hit a foreign computer screen?  Or do we just not give a crap?

I’ve had type 2 diabetes for over 20 years, and I’m pretty sure I know the answer.  The answer is that there is a stigma associated with being a person with type 2 diabetes.  In a nutshell, society thinks we should be ashamed of ourselves.  The general thought is that we bring this upon ourselves (do we?).   In light of this, why should we feel we have any sort of credibility?

If one of us decides to blog about having type 2 diabetes, I think the expectation is that we should be a size 2, have perfect control, and train like an olympian.   We need to provide unequivocal evidence that that we are making every human and non-human effort possible.

Carb cravings, weight gain, and fatigue–are these the symptoms or the causes of diabetes?  This is debated.  More research is coming out to support the symptom theory.  But pshhhh, it doesn’t matter.  This attitude is a form of discrimination.  Who wants to subject themselves to discrimination or the possibility of taunting.  Any takers?

This type of thinking makes it harder for us in our daily private, social, and professional lives.  I’m not saying we can’t control diabetes and its symptoms.  We can.  However, without knowing that our bodies work against us and that it isn’t just a simple matter of motivation and self-control , people give up out of frustration and confusion.

Whether obesity is the cause or effect of type 2 diabetes, the most important thing to remember is that people end up in a situation where their bodies have become highly efficient fat-retaining machines.   Click here to read more on this.

So, I’m coming out and embracing my type2ness, my extra pounds, and my imperfection.  I hope this encourages others with type 2 diabetes to throw off the shame and become socially active online and speak up.  I also hope this encourages others to re-think their beliefs about people with type 2 diabetes.  I hope speaking up helps more people get in control of their diabetes. 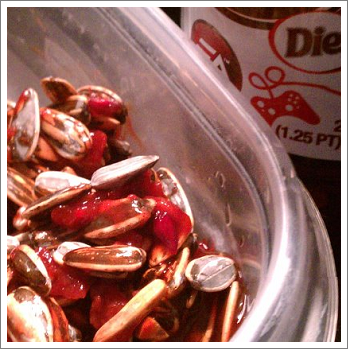 I try to eat mostly raw, unprocessed foods.  However, I am human.  This is one of my favorite quick snacks for times when I feel I need to have a snack while watching a movie and everyone else is eating candy or other something else that makes my blood sugar rise just from drawing the excess carbs swirling around in the air through my skin.  lol. There is no shortage of flavor in this puppy.

Chamoy?  Chamoy is a salty, tangy, citrusy sauce made from pickled fruit.  Usually the fruit is mango, apricot, or plum.  It can be found in Mexican sections of stores or at Mexican markets.  The nutrition labels usually have no or scant sugar and carbs listed.

I have eaten this sauce since childhood as a candy.  We could get it in small plastic pouches from ice cream trucks. We would cut off the top, pour in some sunflower seeds, mix it all together, and enjoy.

I had to share and archive a picture of the old site. Times they be a-changin’. 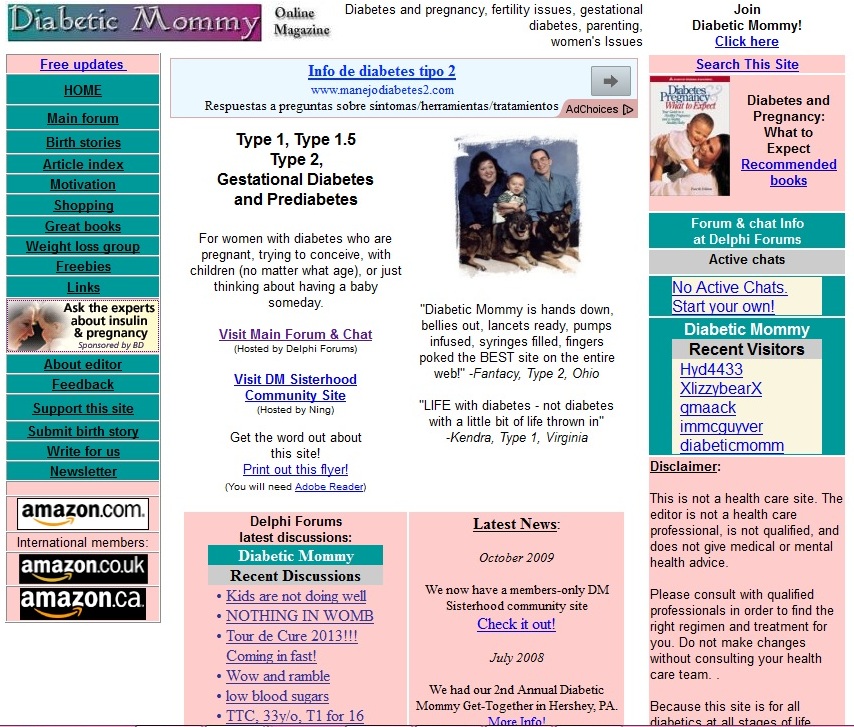 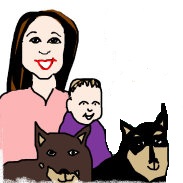 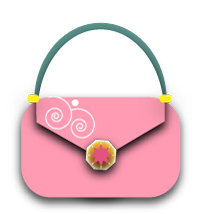 Please be patient while I update and move content from the classic site.  Let me know any suggestions you have.  I love the DM community and hope you like the improvements.