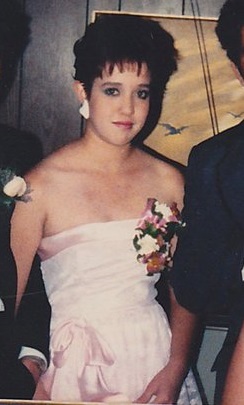 Have you been Keeping up with the Rob Kardashian weight saga?  If not, the nutshell version is a very fit young man gained a lot of weight in a short time.  The common avenues for solutions have not helped.  He is upset, depressed, ashamed, feeling betrayed, and doesn’t know what the hell is happening.

As I follow the story, it feels like someone running a finger down my spine. It takes me back to my almost identical experience.  A situation I luckily figured out how to dig out from.

The picture above is me at my senior prom.  I could barely fill a small dress.  All I wanted at that moment was a nice set of boobs and my braces off.  I had always been on the super skinny side with nicknames like Skinny Chicken and Bean.  However, just a couple years later I went from 120 pounds to almost 300.  BOOM.  It came on in a matter of months.

It was like Jeannie blinked her eyes and BOINGghGghGgh I was fat and getting my butt stuck in restaurant booths and in small cars because I didn’t have the luxury of getting fat slow and gracefully.  I’d get trapped in small bathroom stalls with inward swinging doors.  I didn’t know how to maneuver my body.

I didn’t know how to dress this new body and grabbed mumus and large baggy T-shirts to ensure coverage of all surface area.  It was devastating to my ego.  I kept thinking…what the hell, I don’t eat more than other people.  Well, at least not at first….

I tried diets and exercising, but it seemed like no matter what I did, I might lose a couple pounds and then I’d get heavier.  My cravings increased and were through the roof.  I didn’t know my body was sending hormonal signals to my brain for food and sugar.  It was also ordering me to be tired and not lose weight.  It was the equivalent as if I had been given a pill.

“Normal” methods of weight loss were pretty much lost on me and made it worse.  People telling me to “just” lose weight had no idea what was going on.  I became severely depressed because they didn’t understand and were mean.  I made true epic attempts only to be monumentally defeated.

There were a couple years I barely saw the sun.  I hid out in my house.  I didn’t want to go anywhere or for anyone to see me.  I feel really sorry for my boyfriend at that time who had to visit his fat Boo Radley in a dark house.

I got diagnosed with diabetes.  We didn’t know very much then.  We still don’t–although we do know more. What I’ve learned in my life has come from a lot of experimenting and trial and error.

I am not at my goal weight yet, but I have lost over 100 pounds.  I have come to this place step by step.  Slow sure steps.  I’m getting there.

Watching Rob Kardashian’s struggle has inspired me to follow this post up with more specific posts about how you have to think a little differently with a pre-diabetic or diabetic body.  In other words, stop picking on type 2′s until you fully understand because you can just make it worse!

To be honest, I have to say Rob doesn’t really look that bad and would be considered normal in “real life.”  He’s stuck in plastic artificial land which I’m sure makes it worse.

I also think his mom is reaching quite a bit and exaggerating with the interpretation of his lab results.  She pretty much told him he was dying. I have read reports recently where it was concluded scare tactics don’t work for motivation.  In fact, it backfires.  If his family isn’t careful, I worry they could make him suicidal.

So I hope he finds the same wisdom I did.  I think he needs to stop getting advice from people who have never experienced this and whose methods might be good for the general public but not necessarily someone in the situation I think he’s in.

Tweet
This article was posted in Misc. Bookmark the permalink. Follow comments with the RSS feed for this post.Post a Comment or leave a trackback: Trackback URL.